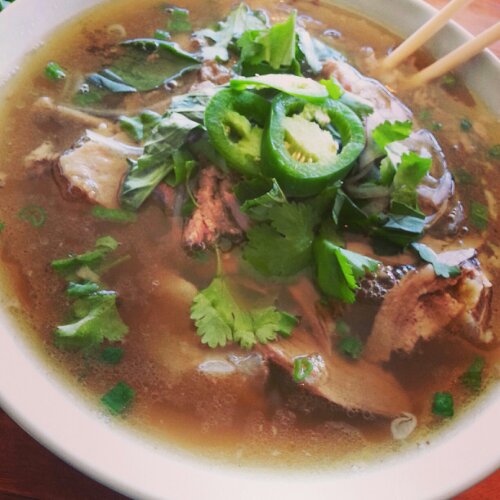 This is an exciting dish for me. I am a soup lover first, but I am pho phonatic!!! There is something amazing about the savoriness of pho that few soups can touch.

Pho originated in Northern Vietnam early in the 20th century, but is believed to have been inspired by a French dish, pot-au-feu (beef stew). A peasant dish in simplicity, there is nothing simple about how this soup pleases your palate. Traditional ingredients, beef meat and bones, herbs, spices, water (soon to be broth) and noodles.

Yes, I said noodles. And, this is one of the dishes I missed most when I went paleo as I typically would eat pho once a week. Traditionally made with rice vermicelli, even with these noodles, it is a healthier option than any gluten containing wheat based noodle. I finally found a grain free substitute at our Asian market. Kelp noodles. Yes, seaweed noodles. They are made from kelp and sodium alginate (a salt extracted from brown seaweed), and are excellent in soups, salads and stir fry dishes. You should be able to find them at any local Asian grocer and even sometimes at Whole Foods or Trader Joe’s. They are fat free, gluten free and very low in carbs as well as being mineral rich and a great natural source of iodine. Try em, trust me…

Method:
1. Place star anise, cinnamon sticks, cloves, lemon grass, ginger, coriander, 5 spice, and bay leaves into cheese cloth. Tie it up into a sack with some kitchen string and set aside.

3. While the marrow bones are roasting heat a Dutch oven on med-high heat, and starting with the first tablespoon of coconut oil brown the chuck in batches, making sure there is a nice crust on all sides. Continue adding oil as needed setting each batch aside in a bowl as you finish. Do the same with the short ribs being sure to brown on all sides including the bones.

3. Brown onions until just translucent and add the chicken stock. Scrape the bottom of the Dutch oven getting all the bits incorporated into the stock. Add the celery, garlic, marrow bones and liquid, browned meat and any juices that are in that bowl, fish sauce, and sack of spices.

4. Finish up by filling the Dutch oven nearly the rest of the way with water. Bring to a rolling boil, lower heat to a simmer and cook 4-5 hours or until all the marrow has melted out of the middle of the bones.

5. Get a bowl. A BIG bowl. To serve, add spinach or kale to bottom of bowl, top with pho, and garnish as you’d like with sliced jalapeños, cilantro, basil, and green onions. It’s best when it’s piping hot! Eat up and enjoy!

Against the Grain Fitness

Against the Grain Fitness

Unleash The Lion Within!

Foods for the Soul

My culinary escapades! A collection of my favourite recipes, photos, tips & the occasional restaurant review. Home is Toronto.

Love Your Life and Live in Love

YOU CANT BEAT THIS CREW

let food be thy medicine

An International company that offers private antique art sales to clients around the globe.

This WordPress.com site is the cat’s pajamas

YOU ARE HERE BECAUSE YOU HAVE CHOSEN TO BECOME A BETTER VERSION OF YOURSELF, SUCCESS SOMES WITH KNOWLEDGE AND EFFORT OF APPLYING THIS KNOWLEDGE TO OUR DAILY LIVES-FlirtAndFitness

The worlds greatest achievers have been those who have the ability to remain consistent in their efforts to reach their goals.